Chronicle of Derrock: The Returned Prince

Chapter I The Wolfsgate:

“It’s just beyond this gate. You know, my father always claimed that if this gate fell the entire kingdom would fall to ruin.”

Derrock rode his horse through the Wolfgate and felt a pang of surprise as he saw the state of it. It was scarcely garrisoned and the soldiers guarding the short wall connected to the gate seemed tired and exhausted. When he left these lands seven years ago the banners had flowed in the wind, almost als to wave goodbye as he departed on his journey. The men on the walls were fierce and formidable and most of all: many.

He saw his Ouregovian friend looking on in surprise as well. Derrock had told tales of his homeland. About the riches and splendid cities and castles that littered the land. He really did not expect to find the Wolfgate in such a state.

“My friend, it seems that something troubles you.” Aegavar said with his strange accent.

Derrock looked at him and smiled.

“It is just strange riding through this gate. Back in to the lands I grew up.”

“Did you not want to come back here? We can still ride back, the dealings with the Emir have not been dealt with yet. We can also set sail, got to southernmost parts of the continent. You know there have always been rumours about a tribe of people who look like cats living in large vine covered pyramids on the Aseweth Peninsula! Can you imagine that?” his friend spoke with enthusiasm. Derrock could not help but smile and even gave a chuckle.

“No, it’s not that. Some part of me will always want to return to these lands. That will never change. And I’ve crossed these gates dozens of times, sometimes it was just another day. But it felt different this time. As of some things have changed. I can’t really explain it,” Derrock spoke out and ended his sentence with a sigh.

“Well my friend it has changed. The Kingdom has lost an heir.” 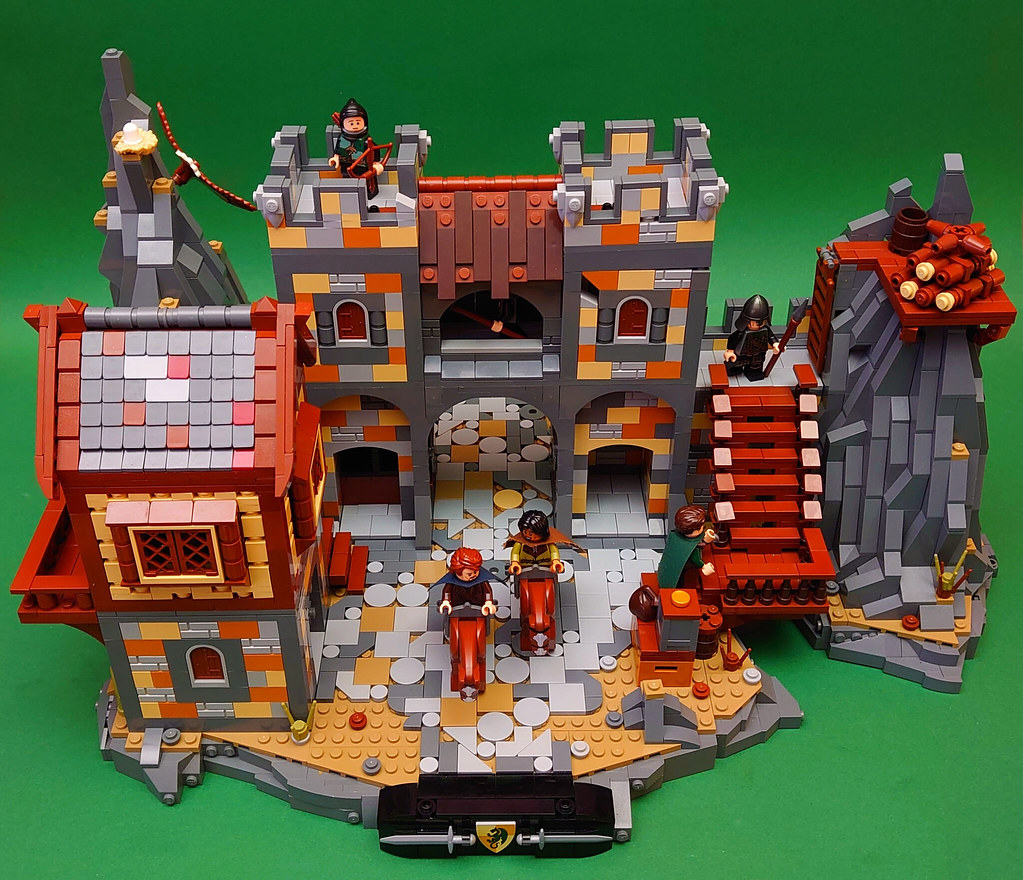 The people scattered away when the Derrock and Aegavar rode in. Derrock’s mood had darkened. Nothing about this made sense. He thought about the words that were scribbled on that letter that had reached him many weeks ago. It had claimed that the sickness had passed and people were getting back to their normal lives. But looking across the faces of the common folk along the street he saw fear and worry. The road from the Wolfsgate to the Narrowgate had always been safe and clear, but Derrock had felt the need to send scouts which troubled him. The road had been full of holes and overgrowth crept along the edges giving ample places for outlaws to lay ambushes. This did not feel like home. It felt like he was riding through enemy lands.

Even the cobblestones in this street were raggedy and Derrock wondered where all the upkeep had gone to. It was almost as if the place had just endured a war. The citywalls had been in disrepair and in some places even crumbled down.

“I must say, my friend, your tales of this city have deceived me for it does not seem much different than any other northern city we have passed through.”

“I… I know Aegavar. This is not the city I remember. Something here is wrong.”

“What makes you say that?”

“Well, look at it! People seem scared. The walls are crumbling. And I have not seen a single guard patrol keeping the order, whereas I have seen several cutpurses make away with spoils. This is not the Whitelance I remember.”

“So what do you think has happened?”

“I have no idea. But there is one place we can find out,” Derrock said as he looked at the large white tower looming over the city and seat of his forefathers. 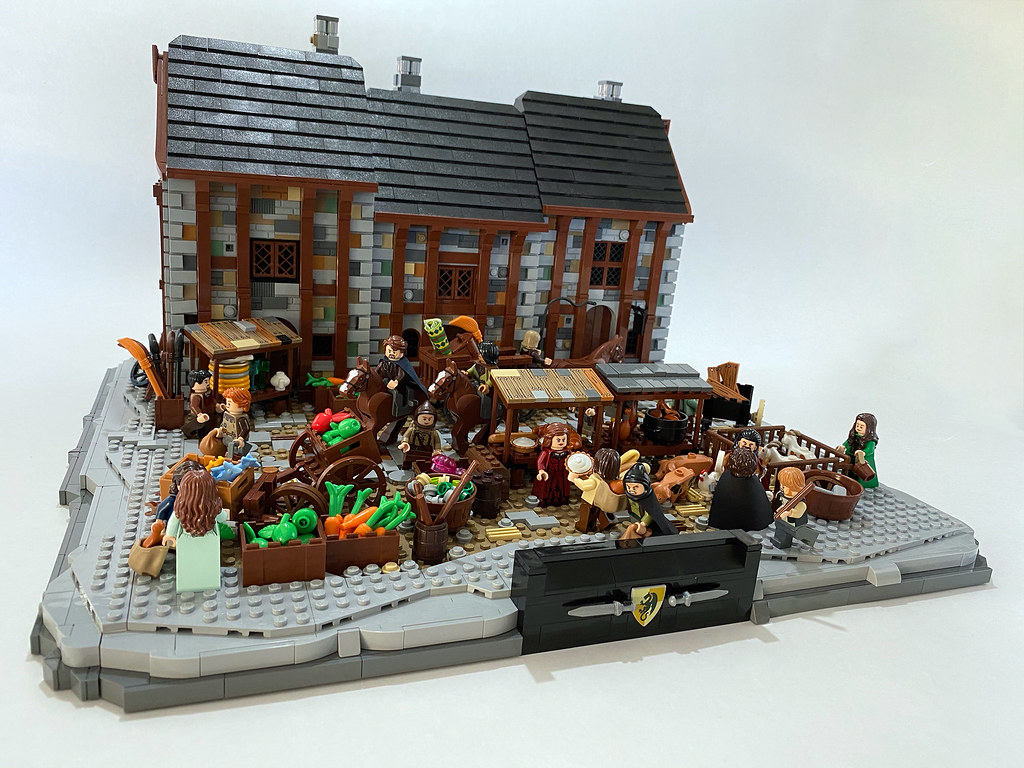 His footsteps echoed through the empty hallway, like lost memories trying to find their way back to him. He could hardly remember how many times his brother and him had run through these hallways much to the chagrin of the chamberlain. They enacted ancient wars and long forgotten battles with their wooden swords and shields. A smile formed on his face as those lost memories had now found their way back to him.

Somehow it did not feel like his brother was gone. And that was a strange feeling. As if he would just welcome him the moment he opened the door and give him one of those annoyingly tight hugs. But he knew this was not the case. It never would be.

The massive hinges creaked as the door swung open in to the Throne Room where the chamberlain had said Derrock could find his father. The guards averted their eyes as he walked past and he made his way to the large seat. He looked at the large white Dragon Skull that hanged above the throne. Its giant maw slightly agape as if to swallow the man sitting upon the throne. His eyes widened of shock when he saw the figure poised within the throne. The man sitting there looked ancient and nearer death than life. How could it be that his father had so far deteriorated in a mere seven years?

“Your father is still recovering from the plague that has festered the lands and taken your brother,” a voice answered from the shadows of the Throne Room. Derrock turned and saw Archmage Grulian emerging from an alcove. The man looked serious and self-conceited and Derrock’s dislike of the man boiled up like an ulcer.

“And who is taking care of the city? Where’s the council?”

“The council was disbanded when they too fell ill. Most of them have survived but they need time to recover.”

Derrock looked at his father laying in his throne, a shallow breath and eyes that were open but did not seem to see a thing.

“And yet you seem fine, Archmage. Why didn’t you take charge and govern this city as it should be governed?”

“Because that is unbefitting the task of and Archmage, young prince. It is not my place as a councillor to govern, but merely to provide council. And furthermore, this Kingdom has seen more strife and turmoil and has always endured.”

Derrock paused and looked back at the Archmage. The look of disdain on the old man’s face reminded him why he loathed the Archmage so much.

“Then apparently it is a good thing that I decided to return, isn’t it? It seems I have my work cut out for me.”

Derrock turned and walked to the large doors, dozens of thoughts racing through his mind.

“Yes, why exactly have you returned, young Prince? It seems awfully convenient to return now that your father is weak and your brother has fallen.”

Derrock stopped in his tracks an anger boiling his blood and his fingers slid to the hilt of his sword. He took a deep breath and calmed himself resisting the urge to ram his steel through the Archmage’s belly.

“I am here because my father asked me to. And because it is my place to remain among the people I have sworn to protect and the family that is dear to me. Now, if you would be so kind to excuse me, I have work to do.” 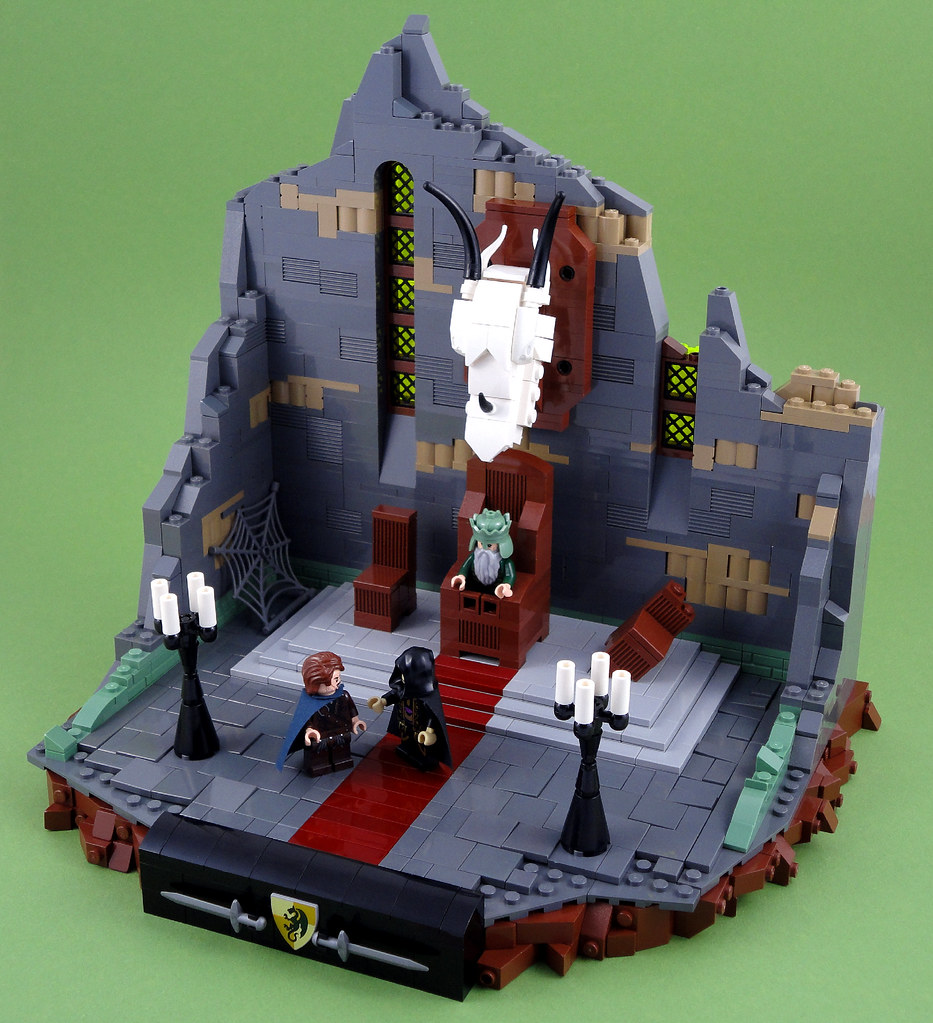 “So… What is it exactly that we have here?” Aegavar asked when he saw the carts with timber, stone and tools.

“Stone to rebuild the walls, timber for scaffolding and ramparts and the tools to cut them in shape. This is all I could muster from the guildhouses, but it is a start.”

“Yes, I know what they are. But why have you gathered them? Surely this is the job of the buildmaster and the council of the city?”

“Alas Whitelance has neither at the moment, so it will have to make due with me instead,” said Derrock with a smile. He inspected the carts and masons and carpenters who looked shyly and worried at him.

“You? Ha! I have never seen you pick up a tool in your life my friend. How are you going to build any thing?”

“Look, something is wrong within this Kingdom and I cannot wait to find out what it is that is rotting from within, but first this city has to made safe. If the southern or northern Kingdoms find out how weak we are, they will scramble over here faster than you or I can say “To the battlements!”, my friend.”

Aegavar looked at him puzzled but silent. His brow arched into a frown but nodded assent.

“Do not worry, my southern friend, I will show you the ins and outs of this grand Kingdom. But I have to first make sure that there is a Kingdom to show to you at all.”

His friend smiled and nodded.

“Well then, my northern friend, let me tell you that beside timber and stone you need mortar as well, for else your wall is gonna be less stable than the legs of man drinking ale all night.”

Derrock laughed and slapped Aegavar’s shoulder before turning to the masons and carpenters.

“Dear men and women, please help me in restoring this city to its former glory. Let us make Whitelance the Shining Wonder of the North once more!”

The men lept to their carts and started unloading the contents. Derrock looked at them contently. It may be a small start, but it was a start nonetheless. Somehow, it did feel like just another day in Whitelance. 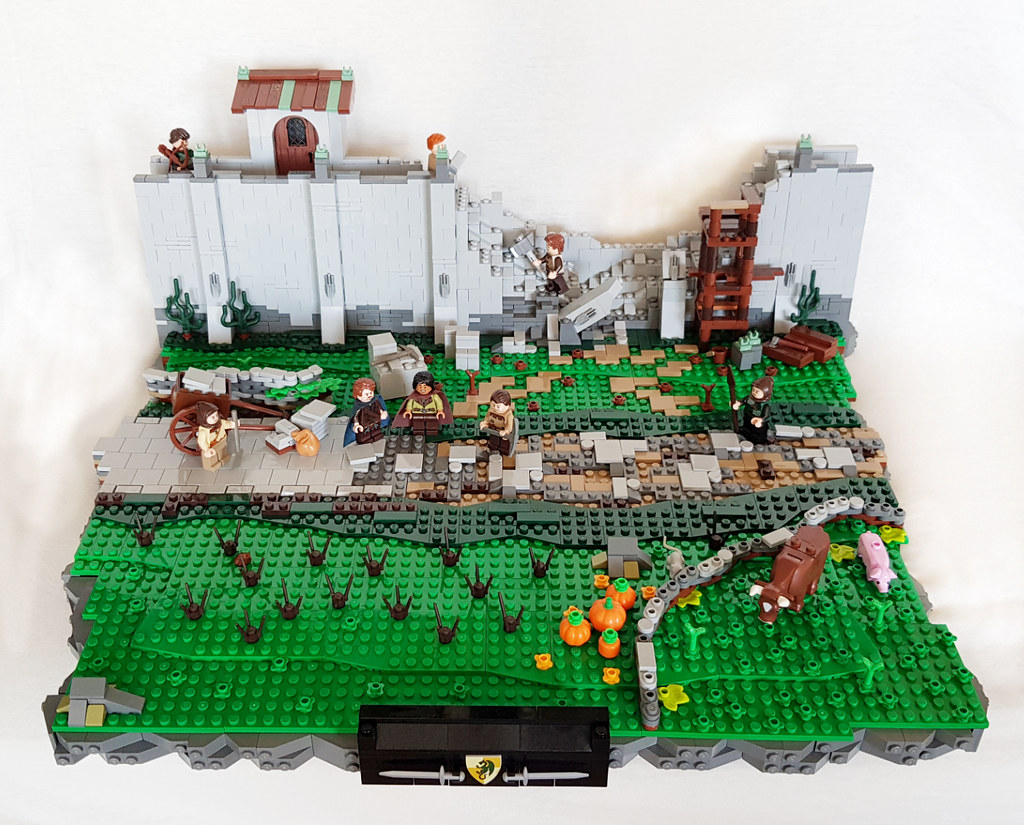 Chapter V The Signing of the Bear Fort Treaty

“During the Blood Plague the Kingdom of Helmshold was looking for help from beyond its borders. Greenmark was the only one who actually answered the call for help, we have to abide by the agreement we made, lord Prince,” the Magister explained as Derrock walked the stairs to the top of the fort. Derrock nodded but was very much suspicious of it all. The Bear Fort stood before them, sturdy and absolute.

He had only just taken on the duties of Heir Apparent and it was a lot more work than he had thought it would be. The Fort stood on the Helmshold side of the Hulburn and the Greenmarkian delegates had already arrived. Which Derrock found odd. The thing that bothered him most was that it was the Archmage who had drawn up the treaty and the Greenmarkians were all too eager to sign it. It just did not make sense.

The Greenmarkian had been hostile to Helmshold for decades, centuries even. What did they have to gain with this treaty? Derrock had read the treaty and nothing in the words seemed to suggest anything malicious or disadvantageous.

“What is on your mind?” Aegevar asked and interrupted his thoughts. The Magister had left them, as they reached the upper terrace of the fort. He saw a servant wetting the blade of one of the knights of the fort.

“I… I’m not sure,” Derrock replied as they walked to the battlements of the fort.

“Something about this seems fishy to you?” his southern friend pried. “Well yes, obviously. The signing of a treaty has never been so easy. All of the articles were agreed upon without contestation. Nobody wanted to amend anything and the only advantages that this treaty holds is towards Helmshold. Something else must be going on and I just cannot put my finger on what.”

He looked down from the battlements and saw the Greenmarkians look up at him, with an almost conspiratorial smirk on their faces. No, he did not trust this at all. 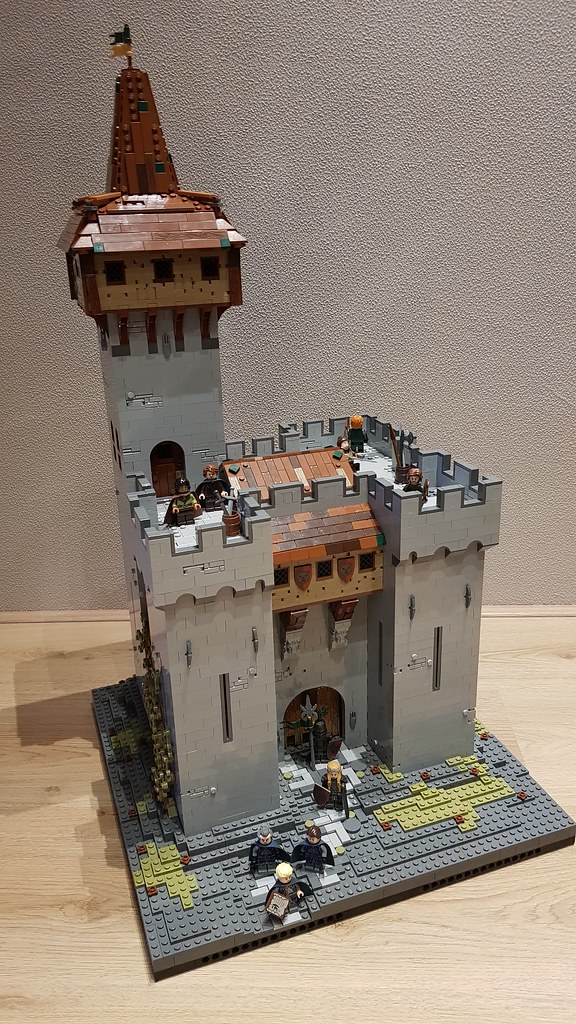 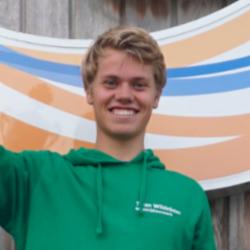